We recognize that COVID-19 has impacted everyone's daily business. So, we are adjusting to meet your business needs and promote safety by following the CDC guidelines.
We're here for you through this pandemic. Please let us know how we can help you.

Diamond Like Carbon (DLC) coatings, a new technological advancement of PVD + PECVD coatings, has been widely successful in the commercial industry. Calico's carbon-based coating has extreme hardness due to the diamond crystal structure and is soft and lubricious due to the graphite crystal structure. Combining these two structures reduces the coefficient of friction by 200%-500% compared to traditional tribological PVD coatings. Our DLC coatings are generally amorphous (without typical crystal structure) and can be deposited using an expansive range of processes with elements like hydrogen and metals such as chromium. These integral components and techniques have an outstanding impact on the properties and structures of the DLC coating.

The properties of DLC coatings in terms of increased hardness, coefficient of friction, roughness, adhesion level, load carrying capacity, resistance to humidity influenced degradation, fatigue tolerance, etc. can be personalized over a varied range depending upon deposition parameters, deposition technology and the combination of materials making up the DLC coating. Calico's Diamond Like Carbon (DLC) coatings are in a dense, metastable form of hydrogenated amorphous carbon (a-C:H) containing significant SP3 bonding.

Calico Coatings is offering the CERTESS®CARBON line of Diamond Like Carbon (DLC) coatings. The DLC process of bonding carbon and hydrogen confers valuable "diamond-like" properties such as mechanical hardness, low friction, optical transparency and chemical inertness. This new advancement in PVD + PECVD (plasma-enriched CVD) coatings has led to the development of customizable DLC coatings. These DLC coatings can have many different combinations of properties that promote high load-bearing capabilities, making them the most suitable selection for improving the performance of engineered parts. DLC coatings are typically bio-compatible and appropriate for food-contact and medical applications. The soft and lubricious surface has great discharge properties, making these coatings a good choice for plastic processing applications.

These DLC CERTESS®CARBON coatings meet the standards of many different operating conditions used for automotive and other general manufacturing applications. Calico has developed a group of DLC coatings that include several layers of different materials such as Cr, CrN, W, WCC and Si with a top layer of amorphous carbon with hydrogen. Calico offers a selection of under-layer materials so our clients' needs such as adhesion requirements, wear mode, contact mode, friction regimes faced during operation, load carrying capacity and other metallurgical sensitivities can be met. 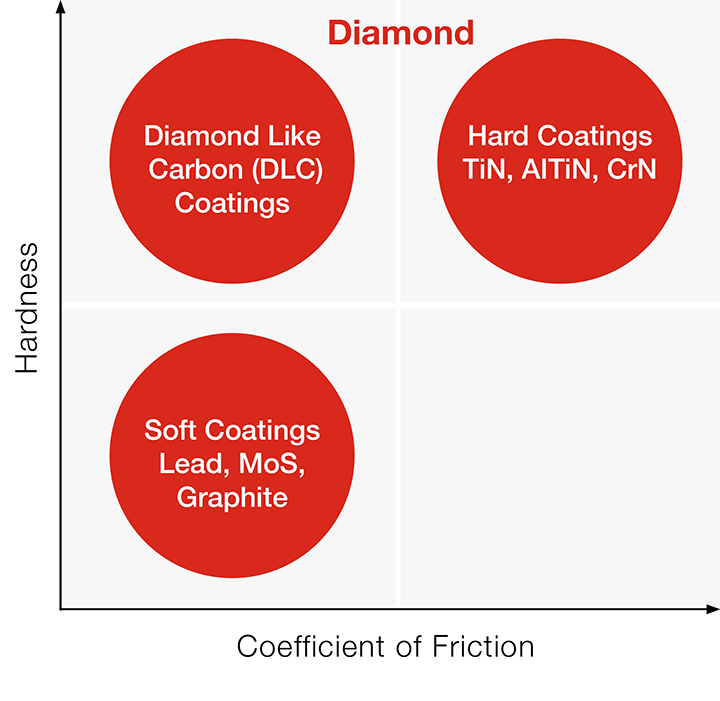 All Calico DLC coatings can be made-to-order based on terms of hardness, coefficient of friction, roughness, adhesion level, load carrying capacity, resistance to humidity influenced degradation, fatigue tolerance, etc. over a wide range depending upon deposition limitation, deposition technology and the combination of materials establishing the coating. There are many common variants of the Calico DLC CERTESS®CARBON coating as follows: